It’s the time to FightBack the Blues NOW! 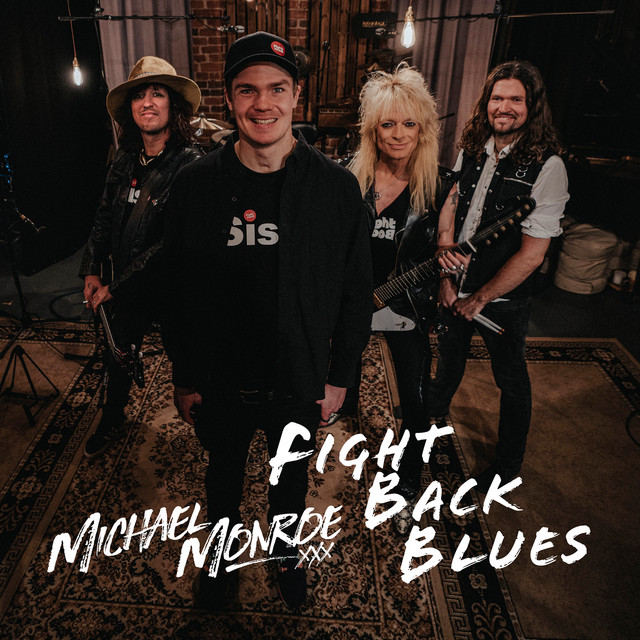 I’m very honored to have these Guys back in my corner! 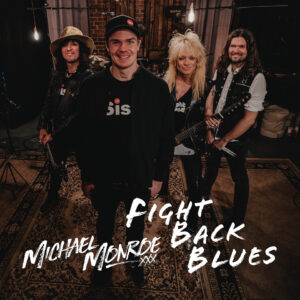 First I’m going to tell you the story of how we became friends with Michael real quickly. The year was 2014 and I was asked to sign a bicycle, which would be auctioned for charity. I was going to participate signing simultaneously with Michael and there was going to be written an article of the event. I made sure I was present at least five minutes beforehand – I did not want to be late from meeting a real rockstar! I shouldn’t have worried, because Michael was at least 15 minutes late. And yes, I’m still giving him very hard time because of that!

”Rockstars…” I thought. I had never met a rockstar yet, so I had no real assumptions.

He’s such a humble and nice fella, who seemed to be sincerely sorry and ashamed for being late. He had heard about my story, and knew that I was going to be signing with him. ”Shame on me for showing up this late, as I get to meet a real hero!” I couldn’t believe my ears, what?! ”He knows something about me??? A hero?!”

Well then… I thought really fast, let’s have some fun. ”Don’t worry, we weren’t expecting you anytime soon – a boor must act boorishly, after all…”

WHAT did I just say??

Then Michael surprised me: ”HAHAHAHA! – I love this guy!”

That’s how it started. We’ve stayed friends and been meeting each other constantly on an irregular basis and then, it was Michaels turn to surprise me again…

We’ve been organizing the FightBack Run for six years now and the event was cancelled last Fall due to the pandemic. Because none of us were ill, we decided to go jogging just for fun and when I got to the venue – there was Michael waiting for me with his guitar! He spoke a few words and presented the acoustic version of the Fight Back Blues for the first time. 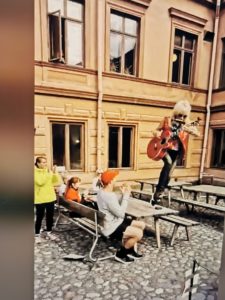 I loved it and Michael decided to record it properly in high end style. Then he rang to everyone best in business and I was invited to join them in the studio. The video was recorded there and that’s how the rest is history. 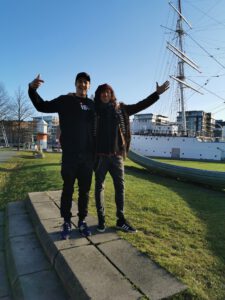 Michael convinced the best bass player Sami Yaffa to join this cause! 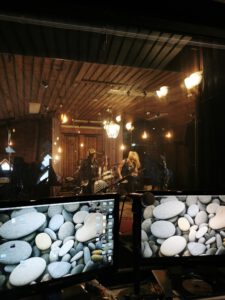 The studio was on fire, so I retrieved to the background.

This was last fall and it was seeming like the pandemic was slowing down for a while, at least in Finland. Now it’s getting real here again, and they are about to restart the restrictions. Even though the spring is just around the corner and it’s getting lighter and lighter – everyone should be feeling happier by now, I feel like people are about to start feeling blue. 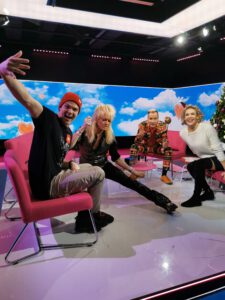 We were in a few shows in Finland last fall. Our message was: Let’s Fight Back The Blues! It’s always important, but I feel it’s more important now than ever. 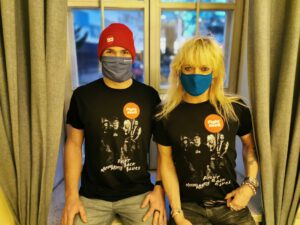 Circumstances are getting grimmer, but together we can Fight Back the Blues!

We have the possibility to choose how we perceive challenges. We can Fight Back the Blues! We must think about all the good things in our lives. You may feel temporarily devastated, frustrated, or ill, but this too, shall pass. This, too, will pass! I believe in the future and I know that I can’t say anything which would turn the situation upside down, but I want to assure you that this will pass.

We have to fight back this virus before that will happen, though. Some of us are geniuses and it’s up to them to develop all the needed medical aids. Attitude, then again, is in my corner and I want to spread positivity! We need a reason to fight back and for this, we need something to look forward for. Let’s make the future pleasant for all of us.

Let’s Fight Back The Blues!